The hypothesis of a nuclear destruction process with neutron collimator ADDS to the version represented by the AE911 TRUTH organization and Richard Gage.

It does NOT contradict the use of thermite and conventional explosives.

What was the material ejection behavior of the twin towers?

The nuclear chimney is necessary to allow the pressure to escape from the ground through the elevator shaft to the top.

The destructive pressure compensation takes place at the predetermined breaking point at a height of 350 m.

The nuclear chimney was created:

Before the nuclear weapon was ignited in the ground, the load-bearing steel structures were weakened systematically:

6.2.1 The turning moment disappearing & disintegration during the free fall

When the North Tower collapsed, the spire swung to the side by 7.5° and back before disappearing in the dust cloud.

The only thing of the spire that that could still be identified was the antenna, the residual structure had been smashed to irrecognizable pieces.

The standing soliton is the stabilizing element:

6.2.2 Mushrooming and simultaneous escaping of steam at the foundation

The twin towers were destroyed as standing towers from top to bottom, while dust clouds were shooting up from the ground and steam developed at the foundation.

6.2.3 Steam explosions of the facade

During the disintegration, explosions were shooting out far below the line of destruction on both twin towers.

Steam explosions take place when water bound chemically in a solid [such as concrete] is all of a sudden overheated extremely.

In this case the water acts as microscopic explosive.

The cracking of the facade was actually accompanied by a kind a of creaking / cracking noise, a loud bang was not reported.

The suggested model gives a plausible explanation on the formation of material shooting out at the side however it is not necessarily the only cause.

It is likely that conventional explosive charges were used additionally.

The twin towers ejected their own material from the inside to the outside like during an eruption – partly taking on the form of a ballistic parabola.

A distinct, eruption-like behavior could be observed for the North Tower.

Two different kinds of dust clouds could be observed at the North Tower during its disintegration, the cloud types were clearly separated.

Aftermath of the explosion: the standing cloud stem

The cloud ascending after the collapse of the North Tower had characteristics typical for the formation of a “cloud stem”.

In principle, the development of a cloud stem is a well-known fact.

It generally occurs during nuclear weapon explosions, or rather for a cloud stem to develop, an extremely hot energetic center is required, a center that supplies the cloud stem at ground level with thermal energy for a couple of seconds.

The suggested model gives a plausible explanation for the formation of a cloud stem.

6.2.7 Gas eruptions from the ground, pressure compensation and updrafts

Observation 1: The miracle of Stairwell B

A protected pocket near the base saved the live of fourteen people, who survived the destruction of the North Tower ("the miracle of Stairwell B").

“My helmet started flying off my head, I had forgotten to snap on my helmet.

So I grabbed my helmet... and pulled myself down into a corner”

Hurricane-like winds inside the North Tower saved the live of firefighter Pasquale Buzzelli during his 50 m freefall from the 22nd floor down.

He landed unharmed on a pile of rubble, approximately 7 stories high.

“And as I was praying the wall cracked and the floor gave way and that’s when I started to freefall and I realized at that point – my God this is how I am going to die...

A split second later I put up my eyes and I was just sitting there, totally numb, looking up a blue sky...””

Pressure release did take place mainly through the elevator shafts – the nuclear chimney.

Strong up winds achieving a speed of more than 180 km per hour were produced due to friction of the air particles and pressure release from below.

Lower speeds can be ruled out as an air current does not carry a falling object until reaching a speed of 180 km per hour.

The Miracle of Stairwell B was possible because the fireman were very close to the outlet which is just like being close to the muzzle of a machine gun or next to an eruption crater of a hot water fountain – just not in front of it but with a lateral offset.

The Miracle of the 9/11 Surfer was possible because parts of the building were still standing, the strong up winds were canalized and vertically surrounded by the building. The 9/11 surfer sank down in this wind tunnel until reaching the height of the pile of debris when the storm winds caused by the pressure compensation subsided.

Surviving a neutron flash of a nuclear weapon detonated at a distance of 75 m seems to be impossible.

The fact that people did survive proves that the neutron ray was extremely focused in vertical direction, the 75 m of granite acting as neutron ray collimator.

The picture shows 6 collimators connected in series, to test the rectification of gamma and neutron radiation during nuclear weapon tests.

Ignition tower, collimators and measuring devices evaporate during the experiment.

Within a few millionths of a second after the ignition the following happens:

Observation 3: growling of a geyser

“The sound was absolutely incredible. Very low-pitched, a bass-like howling.”

“It was the most unbelievable sound. Very deep, a bass howl.”

Material was shooting up [inside] and crashing down [outside] simultaneously during the disintegration in both of the twin towers.

Outer structures close to the ground surface remained standing for a couple of seconds before collapsing. These structures were nicknamed ‘Spire’.

The “shot from the foundation” caused the characteristic formation of the residual structures.

Formation of the ‘Spire’, that collapses after 12 seconds

The structure of molecularly dissociated steel rose up into the sky for more than 200 m before collapsing as dust cloud.

The suggested model gives a plausible explanation for the formation of the North Towers ‘Spire’ with a height of over 200 m and its subsequent disintegration.

Both twin towers distributed their material to all sides in an almost circular manner.

The concentration of material consisting of the buildings’ debris was higher at the sides of the facades, the debris were partly stuck in other buildings.

The higher concentration of material at the sides of the facades results from the fact that the corner pillars of the towers temporarily withstood the internal pressure and thus prevented a completely circular distribution.

Parts of the facade correspondingly were shot away from the eruption center with a horizontal vector.

The overlay of horizontal and vertical vector resulted in a visual fountain effect during the disintegration. 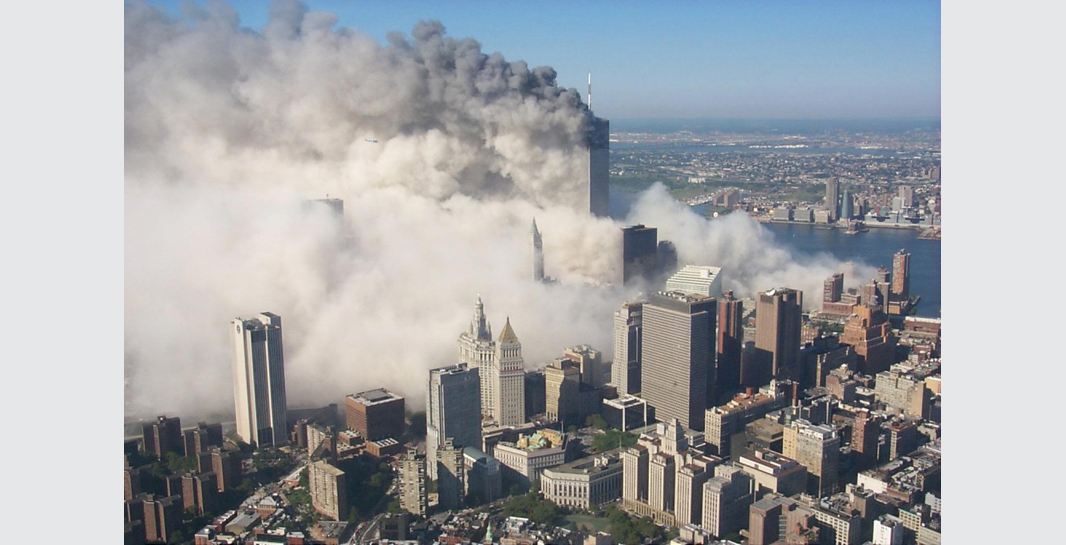 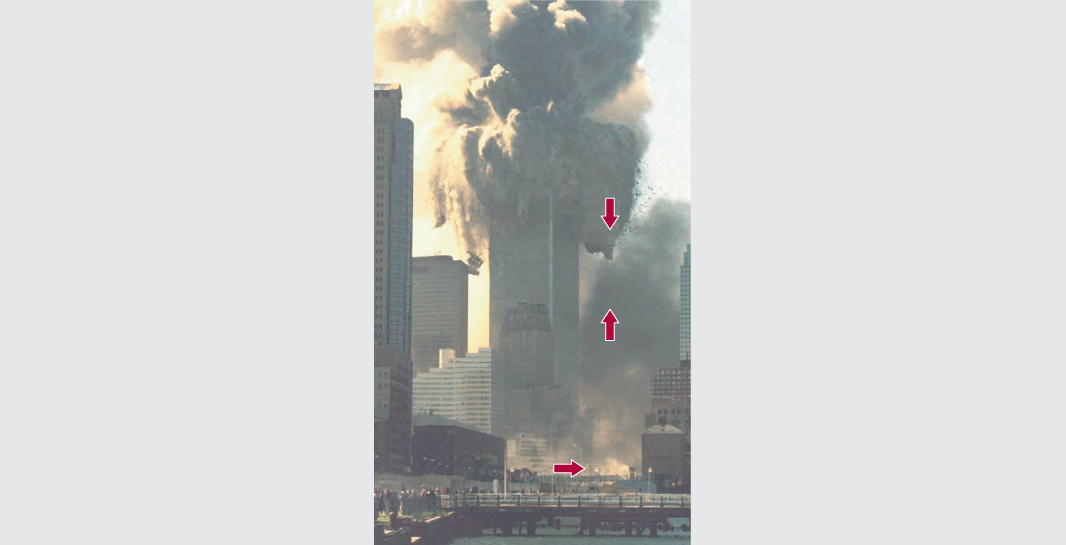 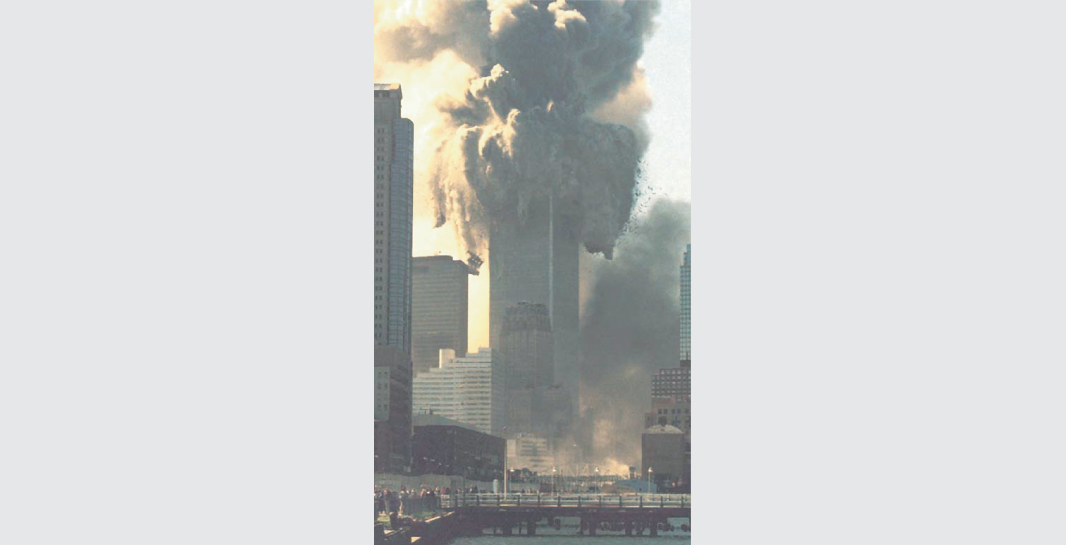 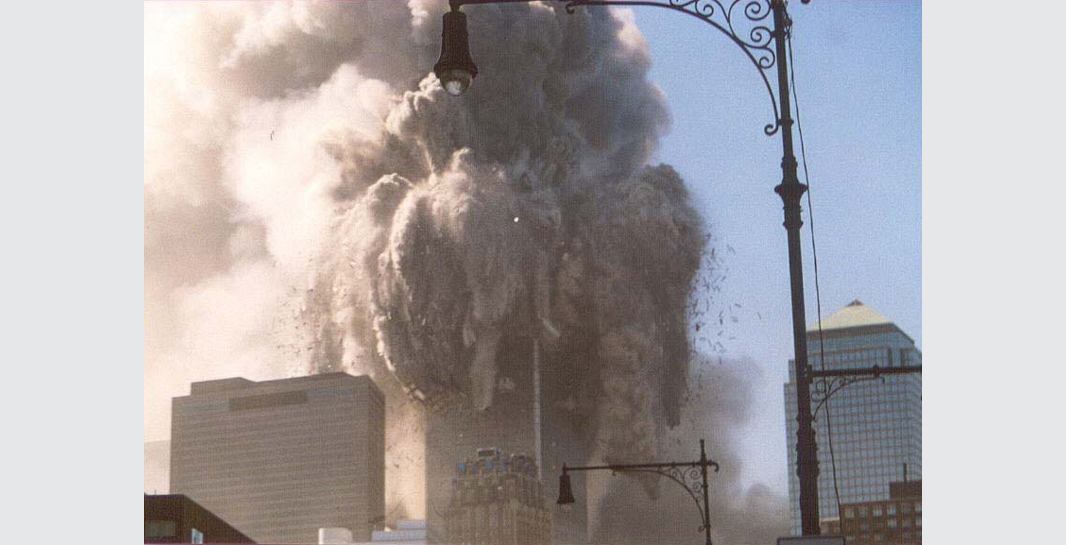 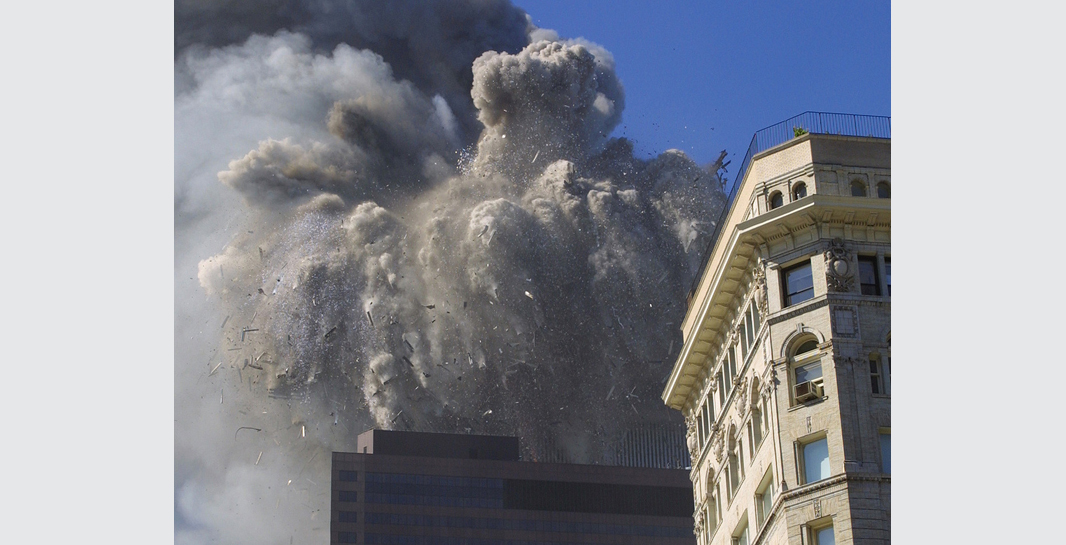 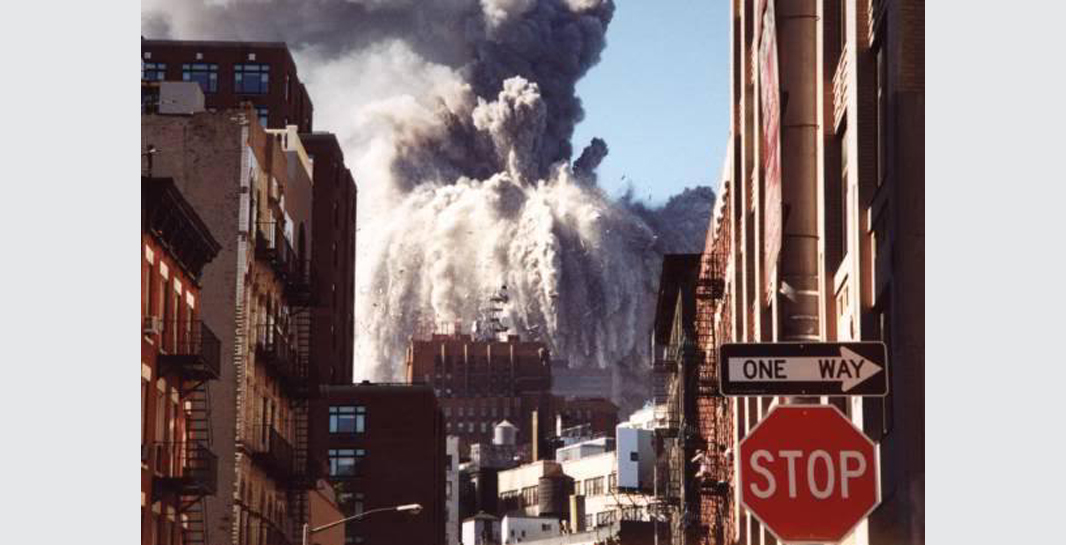 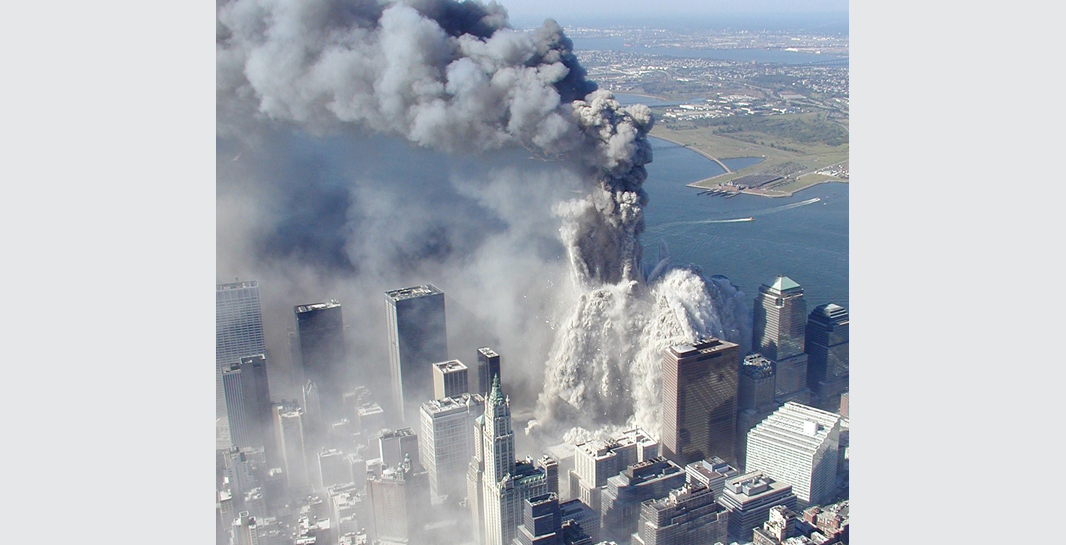 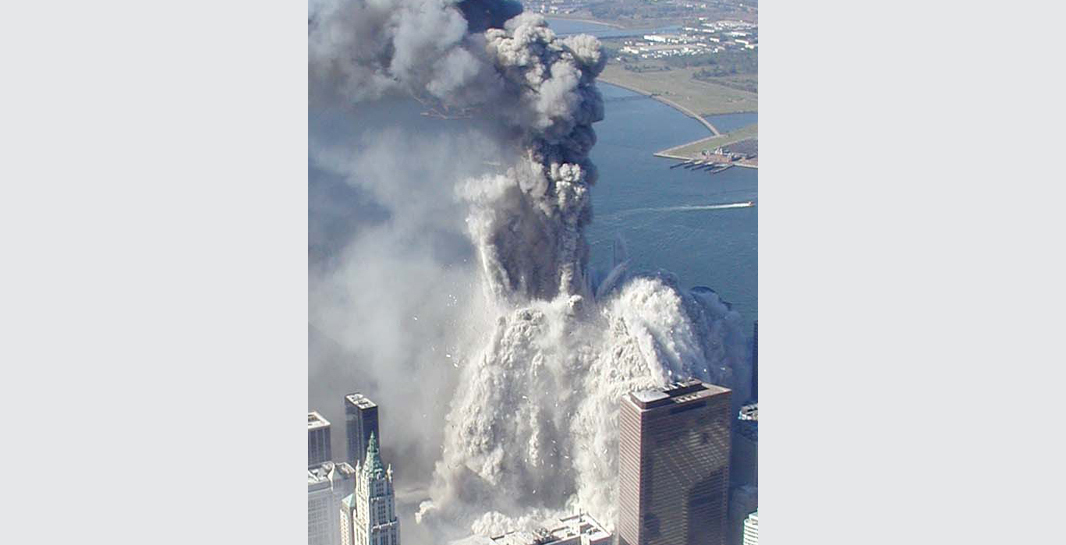 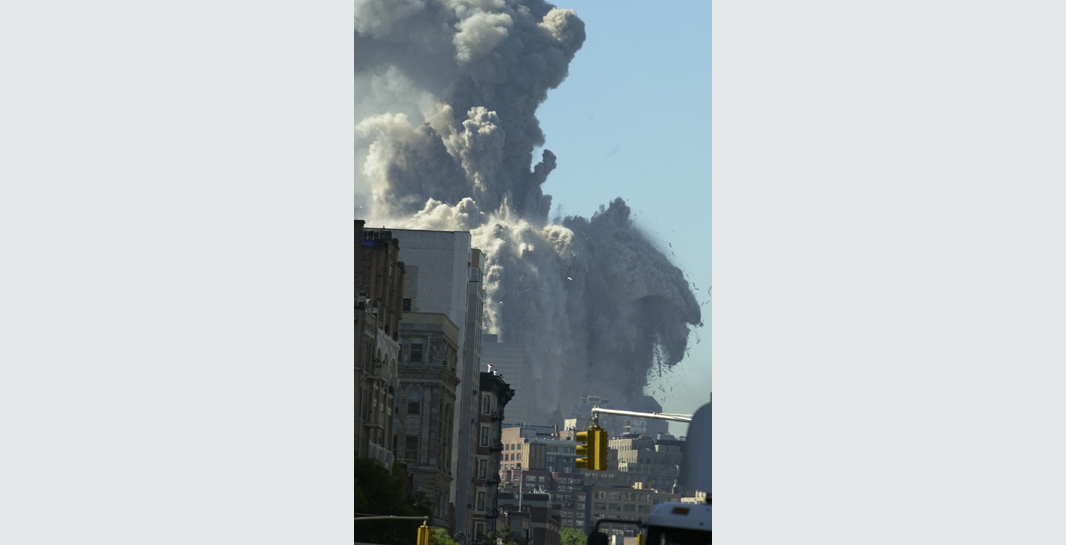 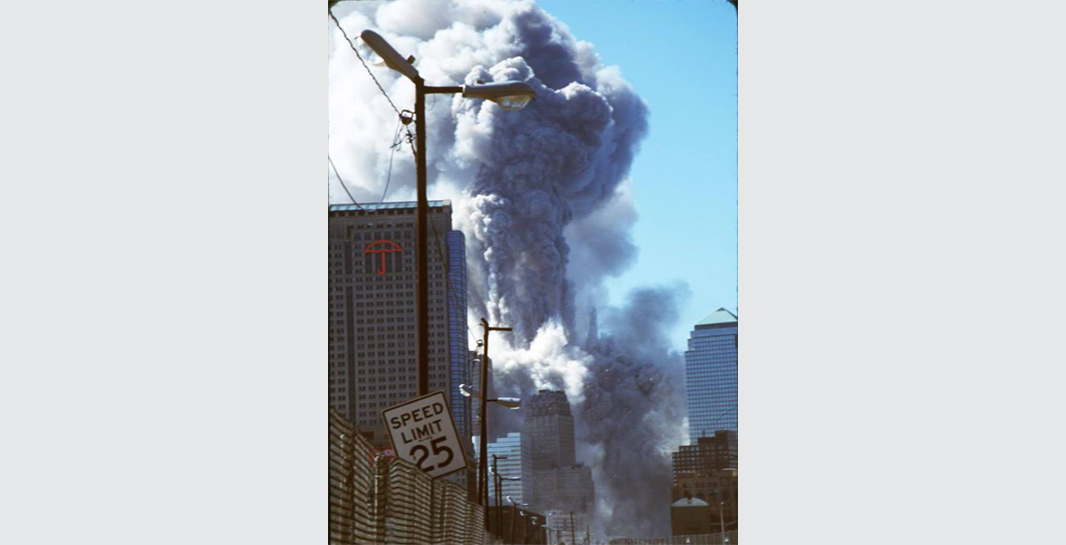 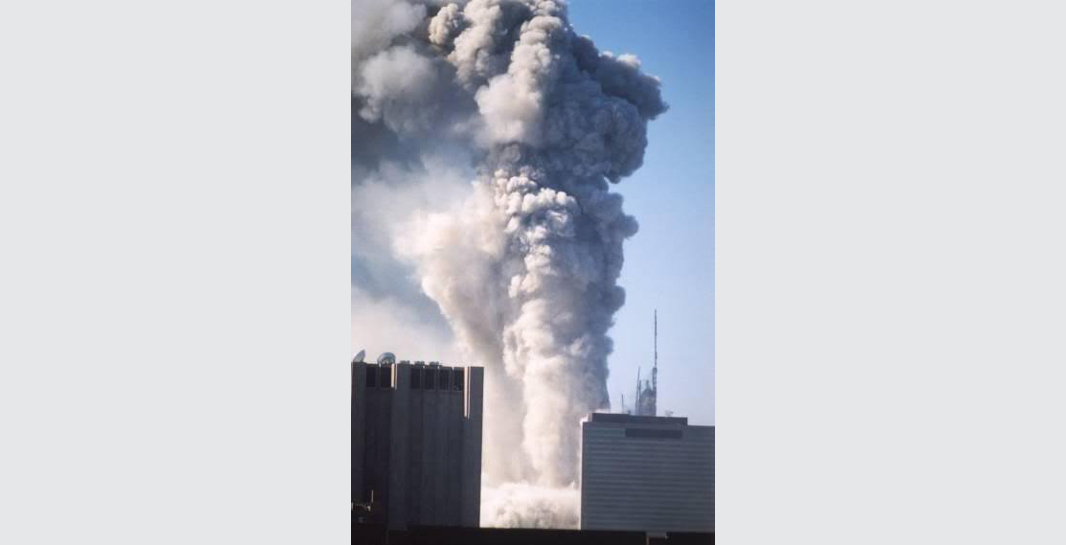 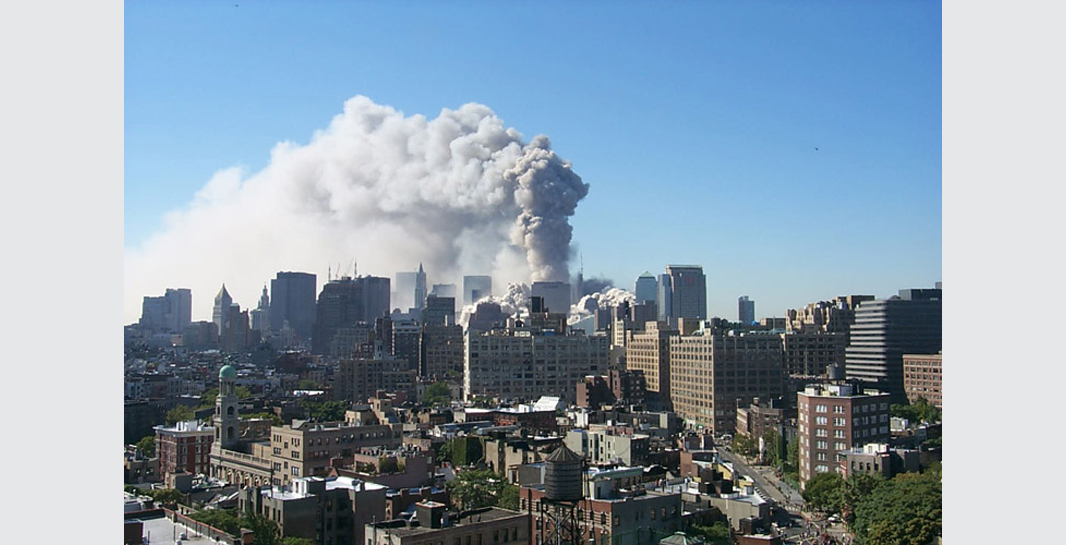 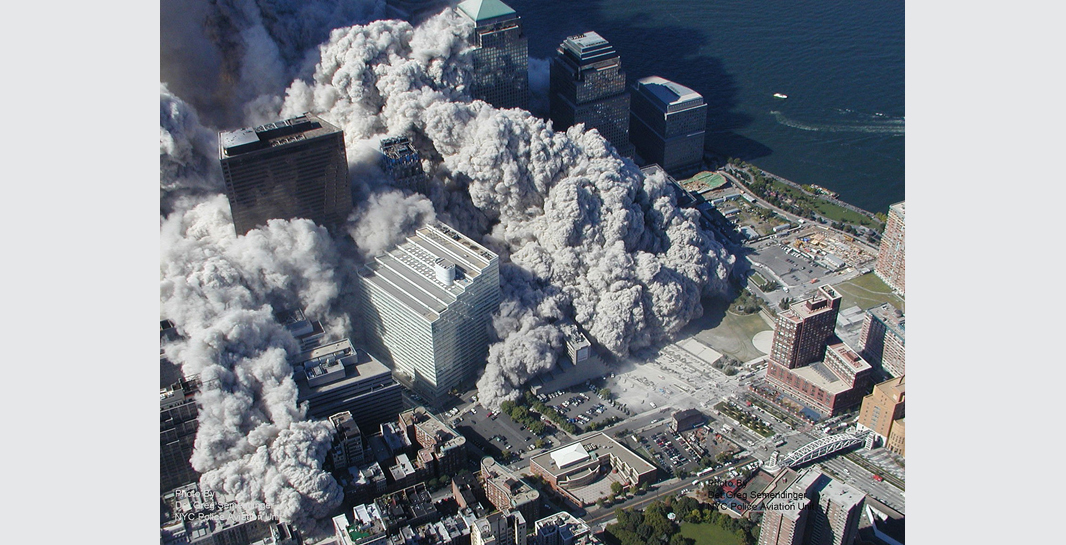 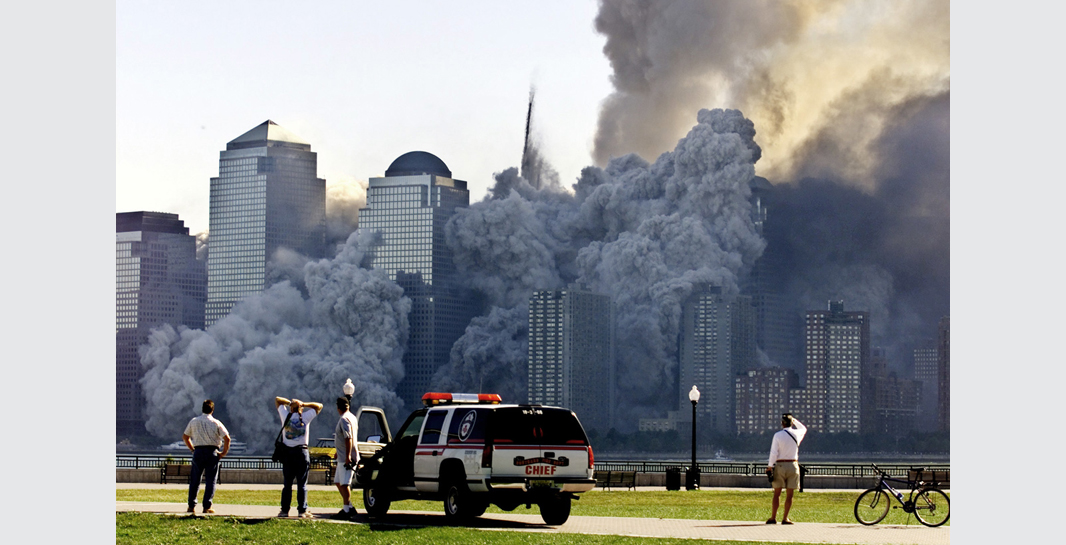 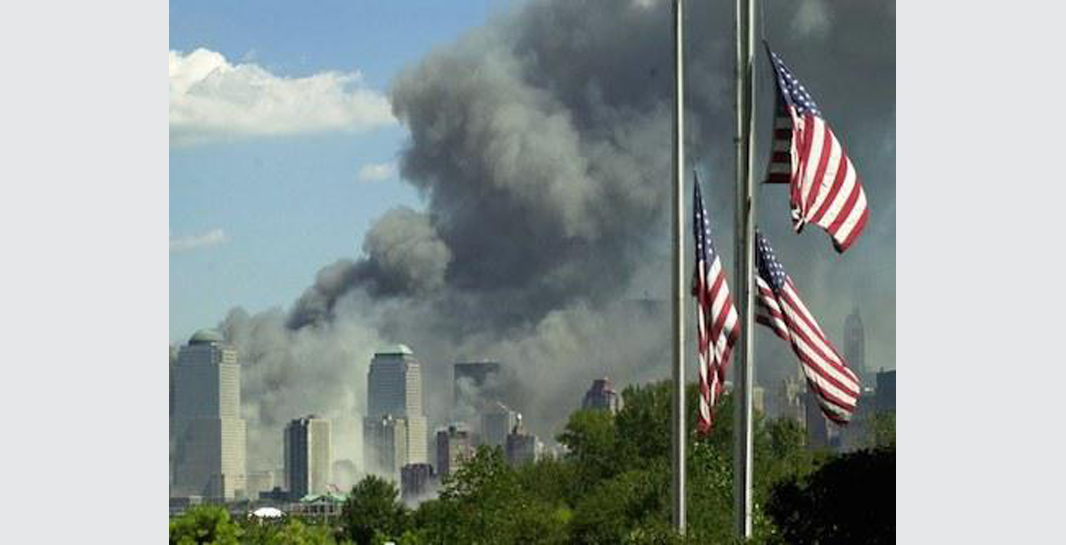 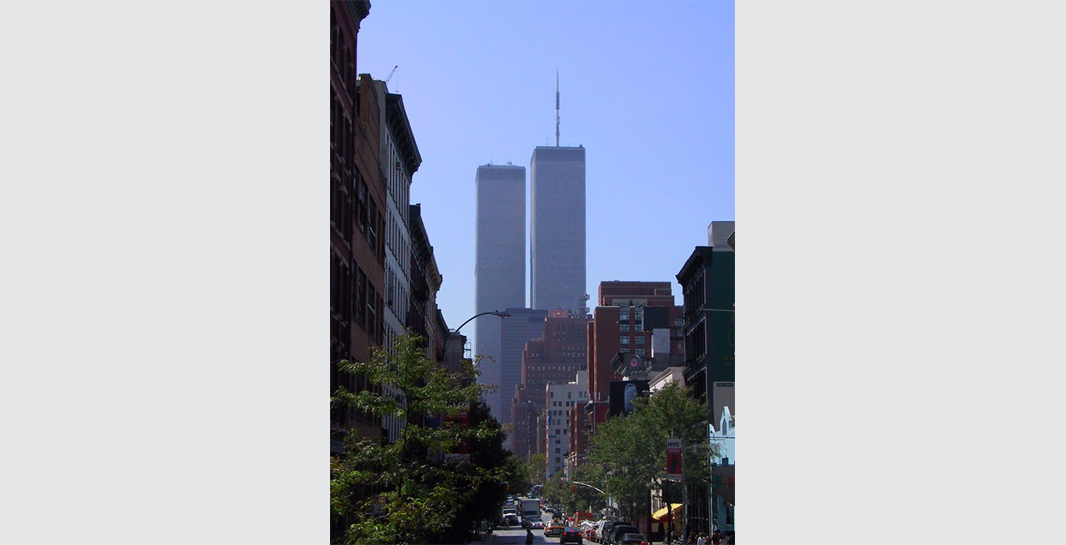 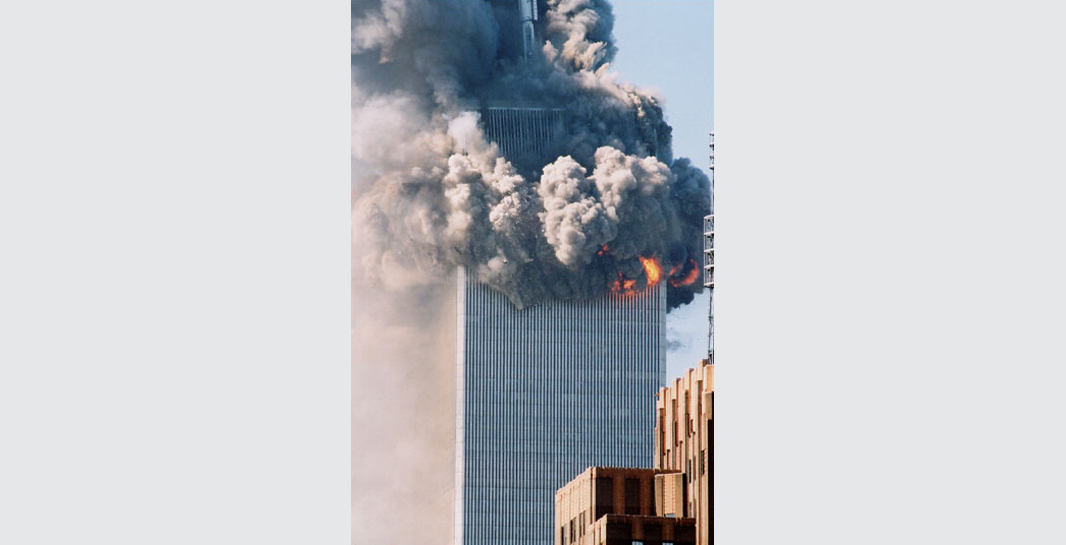 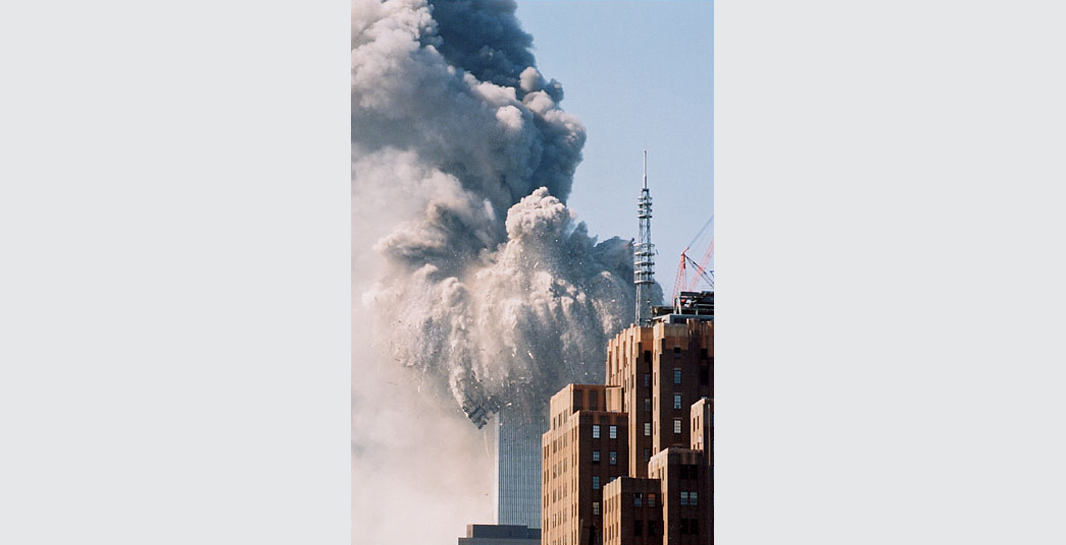 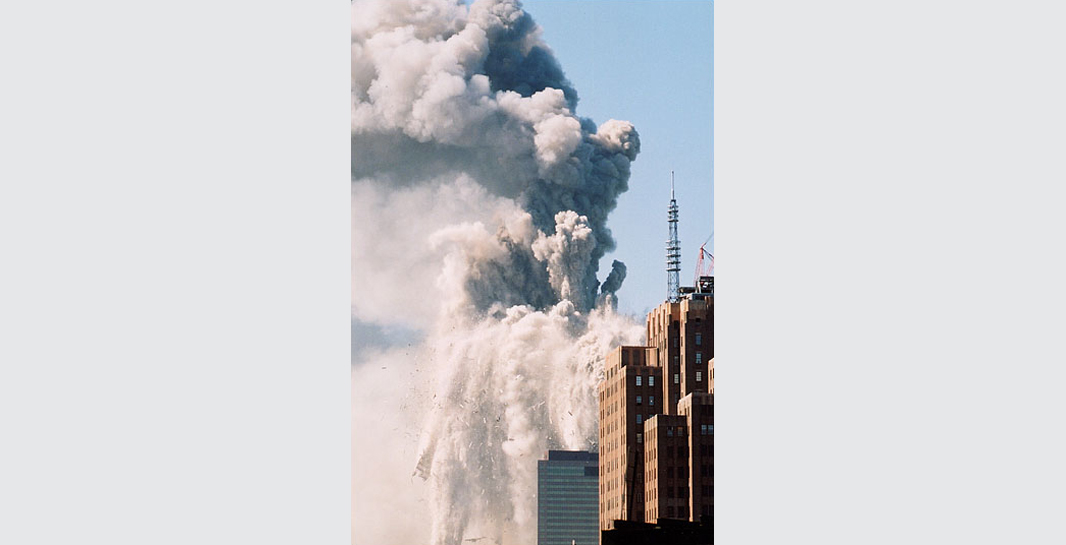 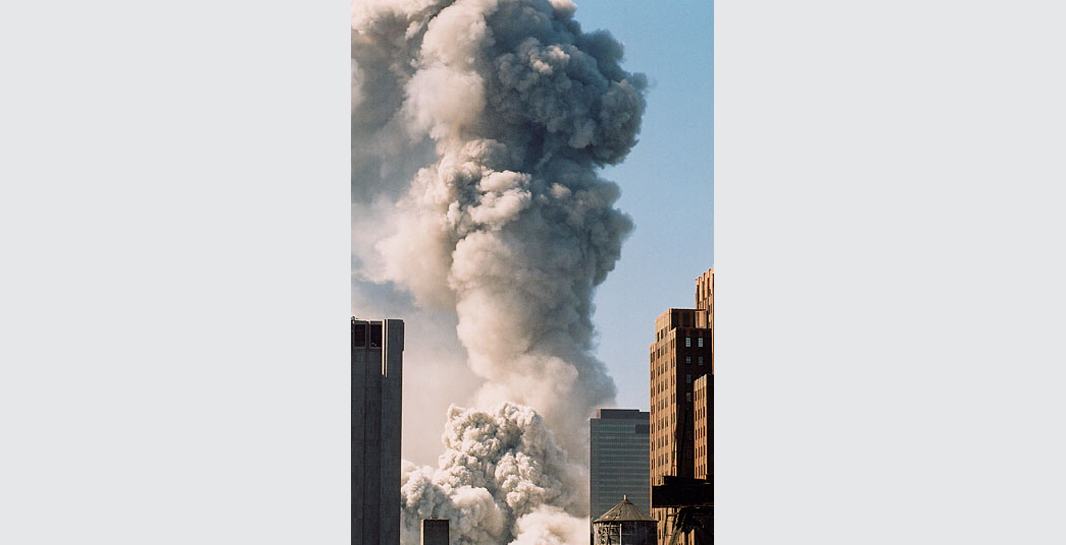